Experimental Aircraft Association (EAA) Chapter 105, which was incorporated in 1961, is located in the Portland, Oregon area and is headquartered at Twin Oaks Airpark. We have more than 200 members and can say with pride that we are one of the most active and passionate EAA chapters in the country. Our history is rich with aviation innovators and doers, and we continue with that tradition today. We invite you to come to check us out, join our organization, visit us for our monthly pancake breakfast, and participate in the adventure and sheer joy of aviation!

You can also join us on our Facebook page for more updates and information, and you can sign up for our e-mailing list and receive announcements about chapter events and programs.

Although the EAA hasn’t maintained its earliest records, the chapter was apparently chartered in 1961.  The earliest chapter status report is dated 12/31/65 at which time Dick “Van” VanGrunsven was president. At that time there were 88 members with 50 home-built aircraft under construction, 11 flying home-built aircraft, and 1 vintage aircraft under restoration. The chapter was formally incorporated on January 26, 1966.

During those early years, chapter members didn’t have a cushy (relatively speaking) chapter hangar to hold monthly meetings.  Instead, they seemed to be a bunch of aviation nomads.  We know that members often met in the basement of a bank in Milwaukie, then for a long time, they found a home at a hangar at Aurora State Airport.  Sometimes they would congregate at a hangar at Lenhardt’s Airport, and for many years they met at the PGE office building at the intersection of Scholls-Ferry Road and Murray Blvd.

In the ’60s and ’70s (we are unclear on the actual dates), the chapter held an annual fly-in at Lenhardt’s, located south of Aurora. Below you can see the approach to 02 on Lenhardt’s airstrip about that time. 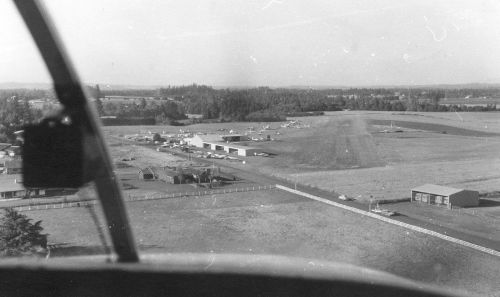 In the following pictures: The first shows planes at an early Lenhardt fly-in.  Below this, the RV-3 on the left belongs to Bob Larsell. He is still a chapter member and still lists this RV-3 as one of two that he owns and flies. The guy he is talking to is Carl Battjes, still a member and a former chapter president.  The one on the right shows Jerry VanGrunsven winding up an RV-3, concentrating furiously on something important.

To the right, Jerry Springer is standing alongside his Minicoup, and below that Norm Durrell and Dick VanGrunsven man the registration table at a fly-in, taking names and counting the money. Both are still members and former presidents of the chapter.

When anyone talks of the early days, the name Holly Fletcher always comes up. He was a member of great enthusiasm who lived at Dietz Airpark.

Under the leadership of Del Zander and Bill Benedict, the chapter began renting a hangar at Twin Oaks Airpark in the early 1990s, where it remains to this day.  Finally, the chapter had a home airport and hangar where monthly board meetings, chapter meetings and other events could be held.

Monthly chapter meetings became the routine.  Since many builders wanted to know what other builders were doing, monthly meetings were combined with a show and tell project, typically at a builder’s hanger or home.  Then as today, RVs were the most ubiquitous design, and because RV builder support was provided by the Home Wing, chapter meeting programs would often seek out some other design or some other aviation-related topic, such as a Lancair IVP, a Thunder Mustang, a T-34, or an evening devoted to painting, panel or some other topic.  Aviation-related businesses also were included, such as Oregon Aero or Advanced Flight Systems.

In 1994, EAA-105 began a fund-raising pancake and grits breakfast and fly-in at Twin Oaks.  Since that summer, breakfast has been served on the first Saturday of every month without missing a month.  Attendance averages 150 to 200 diners, and sometimes many more than that, with lots of aircraft flying in on good weather days.

Other past and present activities include:

With the majority of the proceeds of the George Bogardus estate, the chapter in 1999 established the George and Lillian Bogardus Memorial Trust Fund to carry out charitable, scientific or educational purposes and to support the purposes of several aviation-related 501c(3) organizations in the region, including Chapter 105.